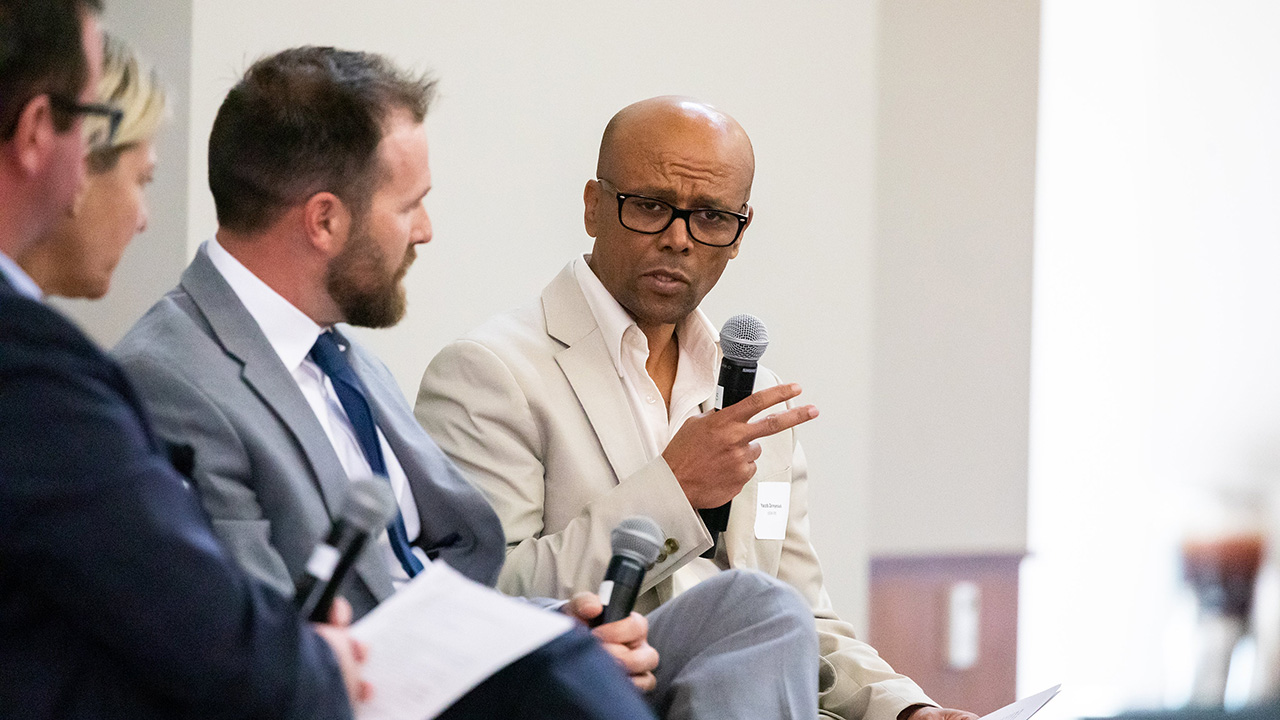 A Nov. 2 Yeutter Institute symposium provided an opportunity for Nebraska stakeholders to hear expert analysis from trade scholars examining a range of key topics, including the state’s ties to the marketplace global.

The event, held at the Nebraska Innovation Campus, was themed “New Models of Business Integration.” Presenters and panelists discussed the business effects of the conflict in Ukraine and the ramifications for North American economies of the overhaul NAFTA known as the United States-Mexico-Canada Agreement (USMCA). Other topics included the economic dynamics of Asia-Pacific and the future of the World Trade Organization.

The panel on North American Trade Issues highlighted a major challenge that Nebraska’s agricultural sector may soon face in Mexico: In an effort to boost domestic corn production in Mexico, the government of Andrés Manuel López Obrador recently reaffirmed its intention to ban genetically modified corn and the herbicide glyphosate, with full implementation by 2024.

The current Mexican government is “taking an ideological stance against genetically modified organisms,” said Kenneth Smith Ramos, a panelist who was Mexico’s chief negotiator in crafting USMCA. “So anything that comes from agricultural biotechnology – GMOs in corn, cottonseed, soybeans – is contested by sectors of the Mexican government.

Mexico has always been Nebraska’s number one corn importer. In 2020, Mexican purchases of corn from Nebraska totaled $348 million. The vast majority of corn produced in Nebraska and elsewhere in the WE contains genetic modifications for factors such as hardiness and increased yield. Mexico is Nebraska’s second-largest foreign buyer of soybeans ($197 million in 2020).

Overall, Ramos and other panelists said, USMCA turned out to be a good follow-up to NAFTA. USMCA reached the necessary agreement on issues such as labor standards, digital technologies and environmental issues and established a dispute resolution process that has demonstrated its effectiveness. North American trade relations face various strains, the panel said. In addition to Mexico’s hostility to GMO but the WE interpretation of USMCA automotive rules of origin provisions has drawn strong complaints from Mexico and Canada.

The Yeutter Institute is named after Clayton Yeutter, a native of Eustis, Nebraska, who served as president and CEO of the Chicago Mercantile Exchange, WE sales representative and WE agriculture secretary. Yeutter earned his bachelor’s, law, and doctorate degrees in Nebraska, and in the 1960s helped the university expand its global reach.

As WE trade representative, Yeutter led the negotiations of the free trade agreement between the United States and Canada, signed in 1988, which became the basis of NAFTA. He led efforts to launch the Uruguay Round negotiations that led to the creation of the World Trade Organization (WTO), establishing the modern international trading system. This step allowed significant market openings for WE agricultural exports.

Much of the Nov. 2 symposium focused on the tensions currently weighing on the global trading system. One symptom of these pressures is the emerging idea among some policymakers that countries might seek to shift the bulk of their trade to friendly countries, Edward Alden, Ross Professor Emeritus at Western Washington, told the audience. University and Senior Fellow at the Council on Foreign Relations. . It is difficult to see how such “friendshoring”, with its goal of exclusion, can be reconciled with the range of WTO provisions that broadly extend benefits to all members, he said.

Julie O’Donnell, the Haggart-Work director of the institute, moderated the symposium, with support from Jacy Thoman, the associate director. Just as Clayton Yeutter has pursued careers in business, law, and economics, the Yeutter Institute has three Husker Professorships in these disciplines: Professors Edward Balistreri in Business, John Begin in Economics, and Matthew Schaefer in Law. Christine McDaniel, principal investigator at George Mason University’s Mercatus Center, spoke on one of the symposium’s panels and was recently named the institute’s nonresident scholar.

The Clayton Yeutter Institute of International Trade and Finance holds its symposium every two years, examining key issues in international trade and illuminating Nebraska’s ties to the global marketplace.

Video recordings of all conference sessions can be viewed here.