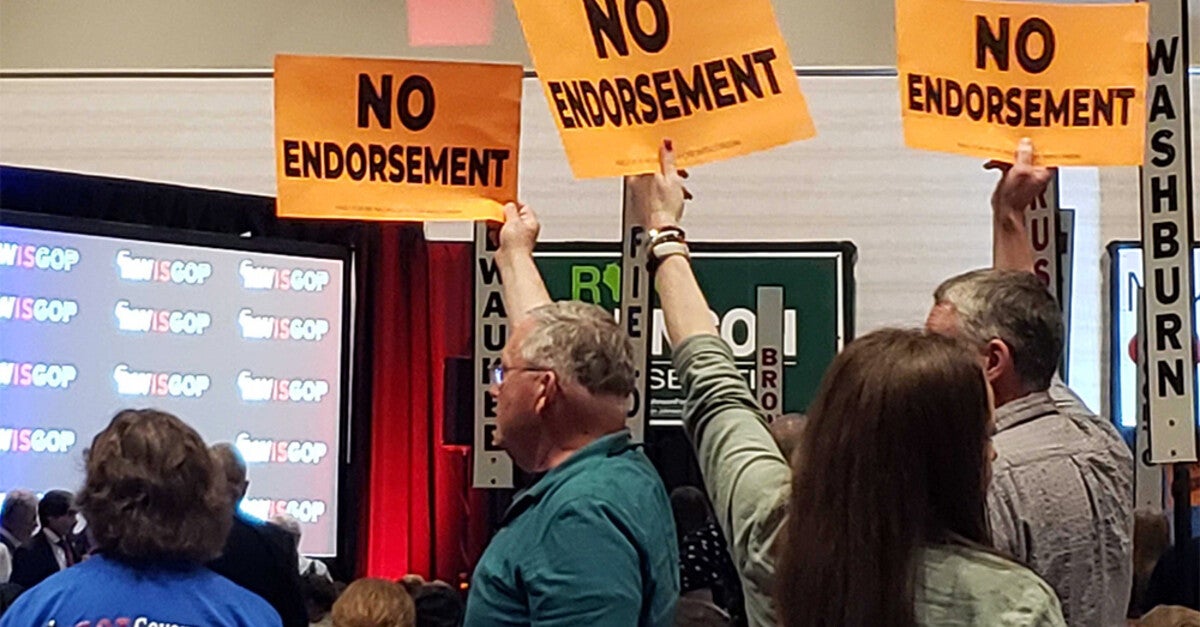 The Wisconsin Republican Party will not take sides in contested primaries for multiple statewide offices this year following “no approval” votes at the state’s annual convention.

While the governor’s race drew the most attention on Saturday, the leading contenders for attorney general, lieutenant governor and secretary of state also fell short of the threshold needed to gain formal approval. of the Republican Party.

State party rules require a nominee to receive the votes of 60% of the delegates to the annual convention in order to gain formal endorsement.

This year, GOP activists successfully lobbied to add a “no endorsement” option to every ballot, and in all contested primaries, that was enough to keep the leading voter from crossing the 60% threshold.

In the GOP primary for attorney general, Fond du Lac District Attorney Eric Toney received about 54% of the vote, compared to 27% for former state Rep. Adam Jarchow. Nineteen percent chose the “no approval” option in this primary.

“THANK YOU to our base and our supporters! Toney said in a tweet after the vote. “You sent a resounding message that @wisgop knows we need a prosecutor, not a politician like our ‘top cop’ to lead @WisDOJ.”

Jarchow said after the convention that his campaign had made great progress.

“Our campaign is designed for the long term”, Jarchow tweeted. “Now is the time for our significant organizational and fundraising advantage to make a huge difference.”

In the race for Secretary of State, Rep. Amy Loudenbeck of Clinton also passed the approval threshold, winning about 54% of the vote to 24% for Jay Schroeder, a real estate investor who ran for the position in 2018, and 22% for “no approval”.

“Despite the fact that the convention voted not to endorse any candidate for secretary of state, I will continue to speak to voters in every corner of this state, listen to their ideas, and share my plan to fix the office of the secretary of state, add value and deliver real results,” Loudenbeck said in a statement.

Seven Republicans have been vying for an endorsement in the race for lieutenant governor, an office that — like the secretary of state — has few official responsibilities in Wisconsin.

On the final ballot, State Sen. Patrick Testin of Stevens Point received about 46% of the vote, followed by “no approval” at 45% and Racine businessman Will Martin at about 9. %. Other candidates, including Appleton State Sen. Roger Roth of Appleton, were eliminated in an earlier approval vote.

“I am incredibly humbled and so grateful to the RPW base,” Testin said in a written statement.

The vote total for Toney and Loudenbeck was nearly identical to former Lt. Gov. Rebecca Kleefisch’s final tally in the GOP primary for governor. Kleefisch received about 55% of the votes, of which about 43% chose “no approval”.

While Kleefisch, Toney, and Loudenbeck have run independent campaigns for their endorsements, they do share some similarities.

Kleefisch pointed to her record under former Republican Governor Scott Walker’s administration while Toney is endorsed by former Republican Party Chairman Brad Courtney, an ally of Walker. Loudenbeck has been a member of the Legislature’s Joint Finance Committee since 2015, where she helped pass and sometimes rewrite Walker’s budgets.

Saturday’s results mean that no candidate will be able to claim the party’s endorsement – or tap into its financial resources – before the August 9 partisan primary.

The party endorsed Orlando Owens in the race for treasurer. Owens was the only Republican to seek endorsement, but Republican John Lieber told delegates he was also running.

And, unsurprisingly, delegates officially endorsed US Senator Ron Johnson in his bid for a third term.