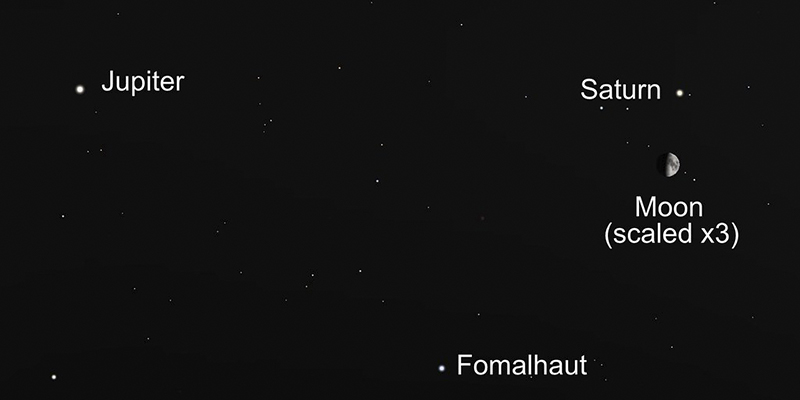 As night fell on November 1, a moon just past first quarter hangs below Saturn, with Jupiter shining to the east. The moon continued to grow as it slid between the two planets on the 2nd and 3rd and under Jupiter on the 4th.

Between and well below the planets shines Fomalhaut, dubbed “the loneliest star” due to its location far from other bright stars. Fomalhaut represents the mouth of Piscis Austrinus, the southern fish, an extremely dark constellation. 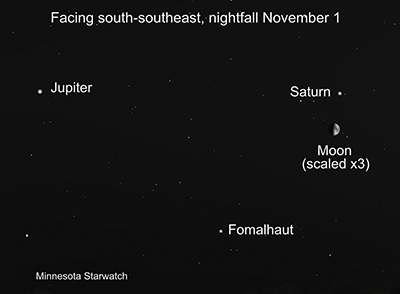 The November full moon experienced a total eclipse in the early hours of the 8th.

As the moon darkens, the bright winter stars enter in all their glory, with special guest Mars. The Pleiades star cluster shines above the moon, and Aldebaran, the eye of Taurus, the bull, shines east of the Pleiades. Aldebaran and Betelgeuse – at Orion’s right shoulder – form an almost equilateral triangle with Mars; the red planet will be the highest of the three.

Mars rises in the northeast about two and a half hours after sunset on the 1st and appears earlier each evening. It’s a great month to observe Mars, not only because it rises at convenient evening times, but because it brightens quickly as Earth gains on it in the orbital race. Mars reaches its peak brightness in early December, when Earth finally catches up with it.

The Leonid meteor shower peaks after midnight on the mornings of the 17th to 19th. It can be an exciting shower; however, for most of this year’s show, a waning but still bright moon will interfere.

Public night sky viewings at the University of Minnesota at its Duluth and Twin Cities campuses have been reduced due to the COVID-19 pandemic. For more information see:

Find U of M astronomers and links to the world of astronomy at: http://www.astro.umn.edu