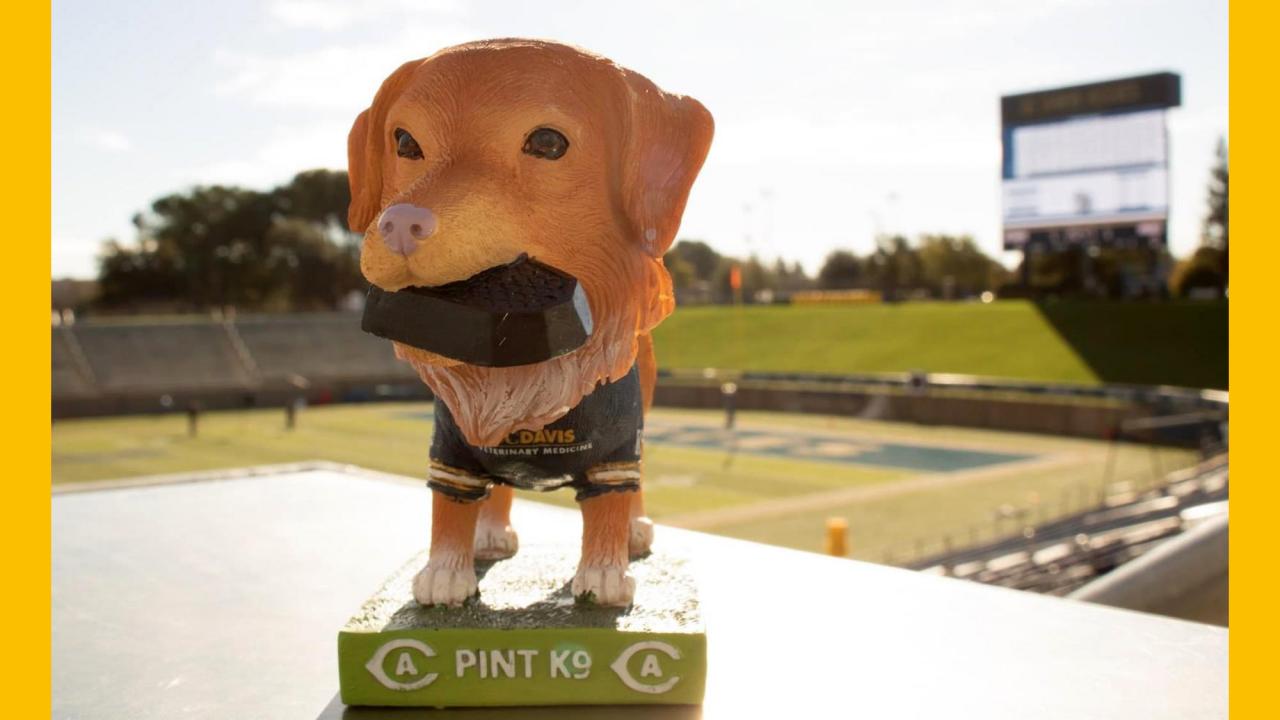 Aggie’s football is only halfway through on Saturday, November 13 at UC Davis Health Stadium. There’s also a pint and a 50th, plus a Doxie Derby and the annual Salute to Heroes.

Pint (No. K9 on Team Aggie) will be on the field to collect the T-shirt, and a smaller version of Pint could be in your hands as one of the miniatures to give away to celebrate his retirement. (Minifigure supply is limited, so check out the Pint Pack ticket offer in the box below and act fast!) The Salute to Heroes Fan Fest – honoring military and military women and first responders, and including a display of Humvees and motorcycles, fire trucks and a medical helicopter – will begin at 3 p.m., two hours before kick-off.

IN THE BLINK OF AN EYE

The game itself will be crucial as, more than halfway through the season, UC Davis and Eastern Washington both have a chance for the Big Sky title and an automatic berth in the NCAA Football Championship division playoffs.

The East Washington Eagles and Aggies, ranked seventh and ninth respectively in the national polls this week, are both 4-1 in conference, tied for third behind Montana State at 5-0 and Sacramento State at 4-0 with four weeks to go in the regular season.

See “At a Glance” for more information on tickets, including a Youth Day offer for ages 3 to 13 ($ 3 plus fees for a total price of $ 5) and a combo offer for admission to UC Davis-Eastern Washington men‘s basketball game, at 2 p.m. on Friday, November 12, and the football game the next day ($ 40 plus $ 1 in fees).

POWER PINT – Nova Scotia Duck Toll Collector Retires after 10 Years of Doing What He Does Best: Recover! Intercollegiate Athletics has partnered with the School of Veterinary Medicine (Pint is owned by Danika and Mike Bannasch, both affiliated with the Veterinary School, Danika as a teacher and Mike as a a clinical trial coordinator) for the bobblehead gift.

DOXIE DERBY – This picnic day favorite will sprint at halftime. And let’s not forget another four-legged star of the show: Josie, who will in turn be our real horse mascot; Josie and her rider, “Maggie the Aggie”, will lead the Aggie team on the field, then stay on site to meet their fans throughout the first half of the match.

THE “MIRACLE GAME” – Also at halftime, UC Davis will honor members of the 1971 squad who saw the Aggies rally 15 points with 20 seconds remaining to defeat Cal State Hayward, 30-29, in what became the “Miracle Game”. He set the tone for 36 straight winning seasons, including 20 straight conference championships.