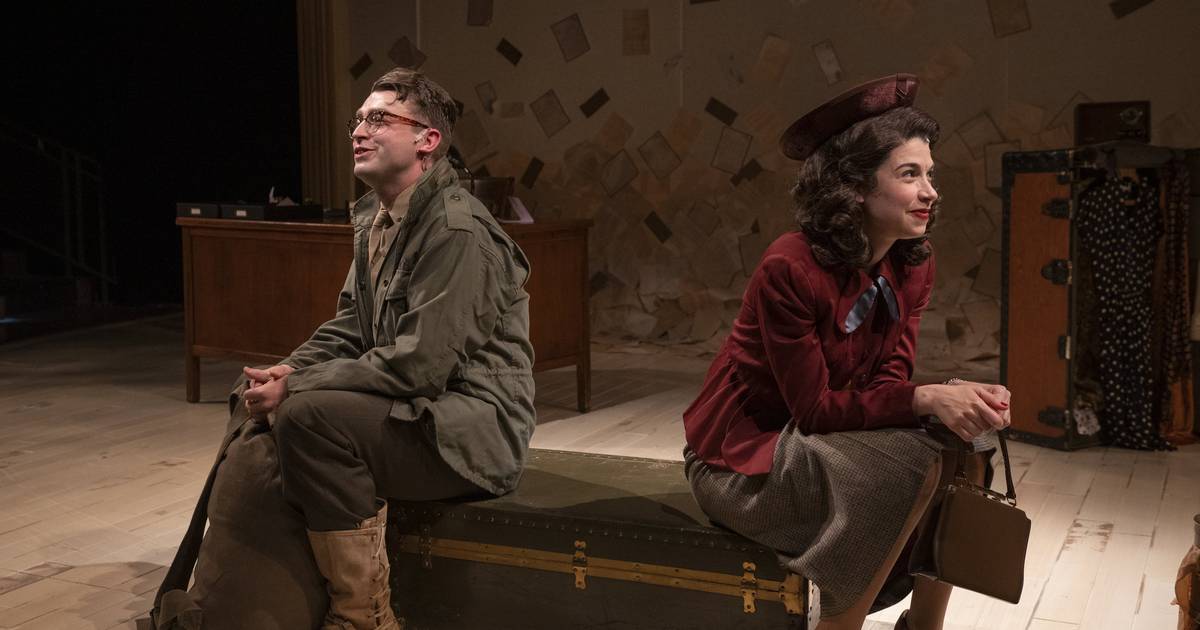 In an age when you can browse through countless photos of potential romantic partners online, the concept of falling in love with someone you’ve never seen sounds like reality TV. Rewind to 1942, and the story of pen pals turned lovers in “Dear Jack, Dear Louise” is incredibly sweet and quaint – but it’s true. Currently playing at the Northlight Theatre, this nostalgic period drama from Olivier Award-winning playwright Ken Ludwig is based on the real-life romance of his parents, who wrote to each other for three years during World War II before meeting in nobody. This touching and personal play celebrates human connections in difficult times.

Directed by Jessica Fisch, the cast includes Casey Hoekstra as Jack Ludwig and Sarah Price as Louise Rabiner. Shy Jack, from small town Pennsylvania, was drafted into the US Army after graduating from medical school and is stationed in Oregon as a military doctor. Louise, an outgoing extrovert raised in Brooklyn, lives in a boarding house in Manhattan and auditions for theater productions at every opportunity, hoping to make it big on Broadway.

After a nudge from his parents, who know Louise’s parents, Jack strikes up a tentative correspondence, and the unlikely pair hit it off. The play’s dialogue consists entirely of letters, which are Ludwig’s recreations (his mother destroyed the actual letters before she died). The fast-paced script and dynamic staging place Jack and Louise in conversation, rather than reciting lengthy passages alternately. Although they never made eye contact or contact during the long-distance relationship, the two actors share a palpable chemistry.

The piece is a great reminder of how much the nature of communication has changed in a few generations. Even during the worst isolation of the COVID-19 pandemic, social media and video calls allowed us to see the faces of our loved ones and hear their voices. Jack and Louise, however, don’t see pictures of each other until they’ve been writing for months. When he finally sees her picture, Jack’s speechless reaction to Louise’s beauty is poignant. Equally moving is the moment they first hear each other’s voices during a rare phone call. Their reliance on snail mail causes several occasions for suspense when one writer’s response is delayed for some unknown reason, and the other has to bear the worst.

Ludwig is best known for his comedies, such as “Lend Me a Tenor”, and his humor shines through here as well. Louise regales Jack with stories of his escapades in show business and keeps him informed of their families’ ongoing attempts to reunite them. When she accepts an invitation to visit Jack’s parents and meets his 11 interfering aunts – without him, and much to her dismay – she finds herself in wacky scrapes.

The World War II backdrop creates an increasing sense of danger as the play progresses. While stationed in Oregon, Jack tells Louise of the compassion he feels for the wounded soldiers who are rushed to his hospital from the Pacific front. Later, he is sent overseas to France, where the successes of D-Day and the liberation of French villages are tempered by devastating losses from the Allied invasion and emerging news from the Holocaust. Jack and Louise are both Jewish, so his horror at what he learns from German POWs is particularly striking.

Of course, the audience knows all along that Jack survives the war and gets the girl back; Ludwig is living proof of that. As a plot, the three-year war between Jack and Louise serves to build tension toward a cathartic end. Only one other source of conflict threatens their budding romance: Jack does something hurtful and hides it from Louise, who later finds out through a mutual friend. Strangely, this dispute is glossed over with relative ease. This may be exactly how it happened in real life (again, the couple’s actual letters have not survived), but it seems like an episode worth exploring further. a dramatic point of view.

The lasting impression of “Dear Jack, Dear Louise” is the resilience of these two young people who weave a beautiful bond despite the constant fear and uncertainty of the war they are going through. Hoekstra and Price play these roles with charm and charisma, drawing the audience into this funny and touching romance, lovingly recreated for the stage by the couple’s son.